What’s Next For The Cape Fear Toll Bridge Proposal 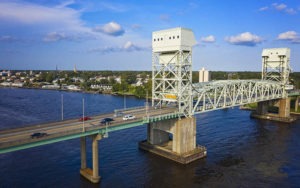 The idea that a toll bridge could replace the aging Cape Fear Memorial Bridge will be the topic of discussion at the next WMPO board meeting this month.

The board of the Wilmington Urban Area Metropolitan Planning Organization has placed the topic on the agenda of its July 28 meeting, according to Mike Kozlosky, executive director of the WMPO.

“This is a potential solution that has been submitted to the NCDOT, that would fund the potential replacement of the Cape Fear Memorial Bridge. And so what we’re being asked is … is there a desire to move forward in further evaluating this proposal, and potentially going to the next steps,” Kozlosky said.

This week, N.C. Department of Transportation officials approached the WMPO with an unsolicited proposal from a private company willing to fund, construct and manage a toll bridge that would replace the bridge.

One of the next steps would be to get additional information about the project and data, to make a decision down the road to see if this toll bridge option would be something area transportation officials might pursue, Kozlosky said.

“NCDOT has made it very clear that they want this to be a local decision. And so NCDOT and the WMPO, if we decided to go down this path, would be walking hand in hand in this effort,” he said. “And I will say that this approach that they have taken on this unsolicited proposal is not dissimilar to other approaches that the department has taken with potential toll facilities and toll discussions.”

The proposal from the unnamed firm is just an idea at this point, Chad Kimes, NCDOT’s Division 3 engineer, said this week, adding that the public would have a chance to weigh in on the idea should the WMPO decide to explore this option further.

Further details about the firm and the details of their unsolicited proposal are kept confidential due to state law on this form of private company project pitch, according to officials with NCDOT.

The current unsolicited proposal for the Cape Fear Memorial Bridge replacement is the first in the state for a toll bridge, Kimes said.

There are other examples of toll bridges around the country, he said. One is the South Norfolk Jordan Bridge in Norfolk, Virginia.

The South Norfolk Jordan Bridge, which spans the Elizabeth River linking the city of Portsmouth and the city of Chesapeake in South Hampton Roads, Virginia, is operated by United Bridge Partners, according to the state toll website.

A toll proposal in Mobile, Alabama, for the Mobile River bridge project was rejected in 2019 from future planning by an MPO.

“The reason it was pulled to begin with was the dollar amount of the toll they were looking at,” Sarah Sislak, coordinator for the area’s Eastern Shore MPO, said Friday.

The $2 billion bridge project in Mobile is now being re-evaluated for scaled-back tolling, including a toll on truckers and a $2 toll on cars.

In Wilmington, Mayor Bill Saffo said he was concerned about how a toll bridge would affect the community.

“As mayor of Wilmington, I would be remiss in not expressing serious concern with the proposal to replace the Cape Fear Memorial Bridge with a toll bridge.

“For more than 50 years, the Cape Fear Memorial Bridge has served as a vital connection between Wilmington and its neighbors. A toll bridge would impose a new expense on the tens of thousands of daily commuters who rely on this bridge, which has major implications for our region,” Saffo said in a release.

Olson-Boseman said in a release, “We have to consider all the possibilities to fund the major projects in the Cape Fear region, especially as it pertains to the safety of our citizens, and we have to understand any and all funding sources that are available. I am eager to understand and learn more about the unsolicited proposal … so we can make an informed decision on how to move forward.’

“Our projected growth and the lifespan of the Cape Fear Memorial Bridge demand our full attention to ensure we can accommodate the growth in population while also attracting new businesses and the jobs they will bring.”

The proposal from the private firm would get the project funded and constructed sooner than going by traditional means of NCDOT project approvals and methods to secure funding, Kimes said.

The proposal came to NCDOT in the fall of last year, officials said. The department has since been working through the proposal prior to presenting to the WMPO this week. With the proposed toll option, this private company would fund the project, and operate the toll bridge for a 50 year period, while NC DOT maintains ownership of the bridge, officials said.

“These public-private partnership projects … you’ll see where this is done in other states,” Kimes said.

The proposal is for designing and constructing a 135-foot vertical fixed bridge (not a draw bridge like the current Cape Fear Memorial Bridge) that would run between Wilmington and Brunswick County over the Cape Fear River and would include three lanes in each direction and a walking path.

“We recognize the pressing need to replace the Cape Fear Memorial Bridge. While more information is still needed to make an informed position on the issue, my fellow board members and I have concerns and questions about the proposal based on what has been reported so far,” Chairman Randy Thompson said in the release. “We are mindful that adding any fee or tax to a service also adds an additional burden on the users, especially those who are on a fixed or low income. Both Brunswick and New Hanover counties, and the Cape Fear region at large, rely on this bridge to connect us to jobs, health care, businesses, and services.

“The replacement bridge must improve—not impede—our connections to those places. Our residents, businesses and industries depend on and expect an equitable option for the replacement of this bridge that aligns with our county’s long-term transportation needs,” he said.

This private company’s proposal is based on Option 2 in NCDOT’s Cape Fear Memorial Bridge feasibility study, which was completed in 2019. The study estimated the project cost at that time to be nearly $246 million.

Kimes said that there is still much to be done in the process should the WMPO agree to move forward with exploring the toll bridge idea.

But it’s the only option available currently to get the bridge constructed, possibly in the next decade.

“It would be expected that if it went to construction by fall of 2024 it would be built by 2030,” Kimes said. “But that will be part of the bid proposal, when are their timeframes.”

“We will continue to maintain that bridge. It’s just that our costs are going to continue to increase dramatically, after the next 10 years on maintaining that structure,” he said. “More and more frequent repairs will need to be made on repairing that bridge.”