Could South Third Street be getting more traffic lights?

Following an analysis of the intersections, a memo released last month by the N.C. Department of Transportation recommended installing traffic lights at South Third Street’s intersections with Orange and Ann streets. The memo is written by Jessi Leonard, the department’s Division 3 traffic engineer.

The N.C. Department of Transportation used the Manual on Uniform Traffic Control Devices to evaluate whether traffic signals are needed at the intersections.

The manual serves as a national standard that ensures traffic control devices are installed consistently throughout the United States, according to the memo. The volume of vehicle and pedestrian traffic, existing conditions and crash history were also taken into account.

Despite the need for traffic signals, no money is currently designated to pay for them. The N.C. Department of Transportation plans to develop cost estimates to compete for statewide safety funding for the project, the memo states.

The petition advocating for the traffic lights has gathered more than 600 signatures since it was posted about a month ago.

Several people who signed the online petition added comments detailing personal experiences of nearly being hit while trying to cross South Third Street, including at the Ann Street intersection where pedestrians can activate flashing yellow lights to alert drivers they’re about to cross the street. 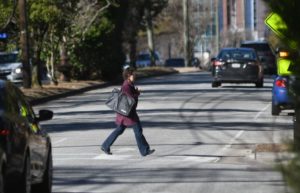 South Third Street resident Dennis McGarry is one of the neighbors organizing the effort. In October, a woman was hit by a car in the crosswalk at Ann Street, according to McGarry. She was not seriously injured.

Conversations between neighborhoods evolved into a larger advocacy effort when South Third Street residents began gathering data on wrecks between Castle and Market streets — a stretch that has no traffic lights or speed limit signs, McGarry said.

The layout of the neighborhood, which is bordered by downtown and other commercial areas, contributes to some of the area’s traffic issues, McGarry said.

“The issue is this little section of residential area is caught between two commercial areas,” he said.

The Historic Wilmington Foundation has helped raise awareness of the effort, posting the petition on their Facebook page and including it in an emailed newsletter.

“We really are just trying to support our members that live in this portion of the historic district,” said Travis Gilbert, the executive director of the Historic Wilmington Foundation.

Car crashes along South Third Street have damaged some historic markers and properties in the area, according to Gilbert.

Several years ago, a car hit the iron fence surrounding the Latimer House, a building that’s home to the Lower Cape Fear Historical Society. The fence, which Gilbert said is rumored to have been relocated from Oakdale Cemetery following the Civil War, took years to fully repair.

Then last year, a car crashed into an iron fence and granite wall in the 300 block of South Third Street, Gilbert said.

“The vehicle came within feet of hitting the building, the historic home,” he said. “That was certainly a wake-up call for the Historic Wilmington Foundation and our members and the residents in that historic district.”

The N.C. Department of Transportation and the city of Wilmington also evaluated the current 35 mile-per-hour speed limit along South Third Street.

A two-week study completed last summer found that 85% of the vehicles were traveling at or below 40 mph on South Third Street. Based on this data and feedback from the city of Wilmington, the department decided not to implement a new speed limit in the area, according to the memo. The current speed limit is 35 mph.

The memo also noted that many of the crashes along South Third Street resulted from distracted or impaired driving or excessive speed — factors that a traffic signal or speed limit change cannot not fully address.

“If these are the underlying causes of a wreck, it is not expected that roadway conditions would change this behavior,” the memo concludes.

While McGarry acknowledges that enforcement is part of the solution, he is hopeful funding for the traffic lights can be secured. That, he said, will make the neighborhood safer for pedestrians, parked cars and homes in the area.

Now, the neighbors are want to get others to back their effort.

“We’re hopeful that we can get the different city groups involved,” he said.