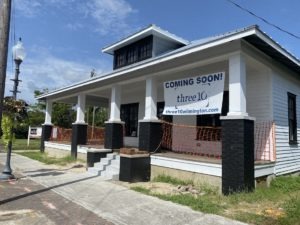 A home at 310 Bladen Street was moved to the corner of Fourth and Swann streets and will open as a restaurant Three 10 by mid-October. (Port City Daily/Shea Carver)

WILMINGTON — Owning and operating a restaurant has been on Jennifer Concklin and Matt Walker’s radar for a decade now. It wasn’t until they decided to make the move from Austin, Texas, to Wilmington, North Carolina, that they began realizing their dream. Little did they know it would also become a historic project that would save a mid-20th century home from demolition.

“This is our first go in this type of vein,” Concklin told Port City Daily a few weeks ago.

The owners were standing on refinished, original pine flooring in the front dining room of Three 10, their seafood restaurant slated to open by next month. Located in the Brooklyn Arts District, the structure is named after its original address, 310 Bladen St., where part of the restaurant used to be located. The front dining room was once the mid-century bungalow known as the Allen-Oliver House according to the Historic Wilmington Foundation (HWF).

“Rather than destroy this contributing resource, preservationists and developers worked together to transform the home into a restaurant,” said Travis Gilbert, executive director of the HWF. 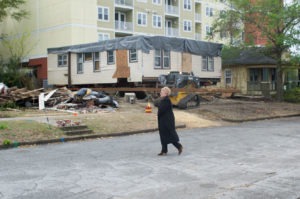 Terry Espy, president of the Downtown Business Alliance and the realtor who linked Walker and Concklin with the Historic Wilmington Foundation to make the home move possible, walks across Bladen Street Thursday afternoon.

Concklin and Walter had the home moved a few blocks north to the corner lot of Fourth and Swann streets in 2018. They had embarked on a yearlong search for the perfect space, with the help of Terry Espy of Momentum Properties. Concklin, originally from Virginia, and Walker, from South Carolina, wanted to be closer to their families.

“We were looking at a bunch of spots and Wilmington kind of split that difference, and had an up-and coming restaurant scene that we were looking for,” Concklin said.

When Espy suggested saving the home in the Brooklyn Arts District, the two hadn’t considered the scope of undergoing historic renovations. Though, it did fit into their original idea of what they would like their first eatery to entail.

“When we lived in Austin, there was this one street called ‘Rainey Street,’ and it was a whole bunch of bungalows that had been converted into businesses,” Concklin said. “And it had such a really cool vibe. We liked the idea of doing something similar.” 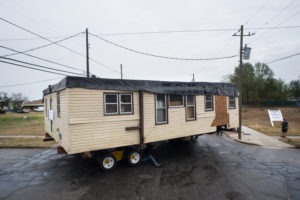 The Bladen home was constructed circa 1929 and had been inhabited first by Richard Lloyd Allen and Myrtle May Coker Allen, according to HWF’s Travis. While doing research, Travis found Mr. Allen worked as a yard conductor for the Atlantic Coast Line Railroad, then located within walking distance from his home, four blocks away on Fourth Street. Travis described the northside as a working-class neighborhood in the mid-20th century.

The bungalow was a three-bedroom dwelling, originally 1,200square feet; the restaurateurs added another 1,200 square feet to the back of it, to double its size. The restaurant will seat just under 100 diners, including 40 on its outdoor wrap-around porch.

The restaurateurs have been working with architect Gordon Hall and contractor Greg Uhl to transform the house. The dwelling was donated by WRE Holdings three years ago under the condition that the HWF would move the structure from Bladen Street, soon to be the location of the expansion of City Block Apartments.

“The northside of Wilmington is witnessing alarming destruction and alteration of contributing resources to the Wilmington National Register Historic District,” Gilbert said. “It was important for the Historic Wilmington Foundation to save the Allen-Oliver House from destruction to show the community that preserving the northside’s built history, through adaptive reuse, makes good economic sense.”

Part of the goal of the restaurateurs and their architect and contractor was to use as much of the original materials as possible, and recycle or find a home for that which could not be reused when constructing Three 10.

“It’s a lot, you know, since building codes have changed,” Concklin said. “We are now a commercial property as well, which is a lot different than a residential.”

The home itself had good bones, they confirmed. The crews knocked out all the walls, down to the studs, to reinsulate the space, and had to extend the already high ceilings by a foot.

Contractors uninstalled the roof in order to relocate the building. Restaurateurs replaced it with a tin roof.

The team also tried to mirror original dimensions in certain aspects around the space. For instance, the porch is the exact distance from the street as it was when located on Bladen.

“All of the ventilation needed a good bit of space up there,” Walker said. “And we liked the idea of the metal roof because it’s period — fits in well with the era.”

“Our steps are the same,” Concklin said. “The posts are very similar, although the round columns that were there before aren’t; we decided to go square. 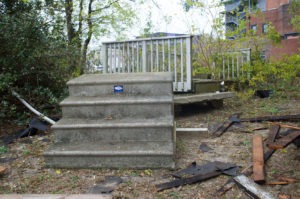 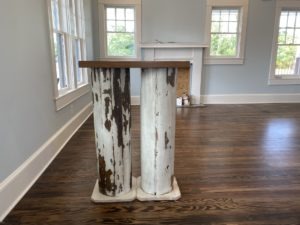 The host stand at Three 10 was constructed from the original home of 310 Bladen Street, which was moved to the corner of Swann and Fourth streets in 2018 to undergo renovations to become a restaurant. (Port City Daily/Shea Carver)

”Yet, they used the old columns to construct the host stand in the front dining room.

Contractor Uhl is taking scrap lumber to build out other areas needed throughout the space, such as liquor shelves in the stock room. Most all other construction waste went to Legacy Architectural Salvage.

“There are still some very cool tongue-and-groove wood that we just didn’t have a home for,” Concklin said. “I put it on Craigslist and a woman by the name of Stacy, who is a local furniture builder, grabbed the rest of it to use to shape furniture.”

“It makes business sense as well,” Walker added. “Everything we buy we’re paying for, so it doesn’t make a whole lot of sense to throw it away.”

The same no-waste policy will be utilized in Walker’s kitchen. “We’ll get as much whole product as possible and use every little bit of it,” he said.

Three 10 will focus on local seafood prepared by way of modern, Southern cuisine. Walker admitted having rewritten the menu eight or so times already. One item has stuck: North Carolina shrimp with Carolina gold risotto.

“It’ll be a nice creamy rice dish with butter-poached shrimp, and then we’ll have the Trinity [a base of three ingredients, which in Cajun cuisine is onions, celery and peppers] and Tasso ham in it as well,” he explained.

He’s pared down the offerings to 20, including desserts. Vegetables and seafood are the star of every dish — no beef or chicken. Only one pork dish will be included, featuring a 14-ounce bone-in, center-cut chop meant to be shared among diners.

“I’m big on sustainable agriculture and farming in general,” Walker said. “And chicken and beef just doesn’t really hit those marks for me. And there’s plenty of places to get that stuff in town.”

He will focus on North Carolina products as well and is working with local farms, such as Black River Organics, Terra Vita and Red Beard. Agricultural organization Feast Down East, which works with multiple southeastern North Carolina farmers, also will procure fresh items, which the chef plans to utilize to accommodate vegetarian palates.

Walker said he will elevate homey items, such as squash casserole, with a culinary twist. “I’ve got a green tomato and pickled peanut relish with some Goat Lady goat cheese that’s going on top of it,” he explained.

Seafood trimmings will be used to make kids’ fish burgers. Fish bones, as well as shrimp heads and shells, will become the foundation of homemade stock, to be used across multiple dishes.

Walker said he is also changing up a South Carolina classic, Frogmore Stew, normally served with corn, shrimp and sausage. His version will come with slow-roasted sweet potatoes, littleneck clams, and cornbread toast in a greens pot liquor, topped with seared grouper, which he will butcher fresh.

A raw bar also will have tuna crudo and a variety of local oysters, served raw or broiled.

“The menu basically goes from the smallest thing to the largest thing in order,” Walker said. “And this is the way I like to eat: I like to go out and be able to sample a lot of different things and not get stuck with a huge plate of something that, even though it might be good, I’d probably be done with it in three or four bites.”

“We’re looking at the price to be around $40 to $50 per person to have a really nice meal with beverages,” he said.

Walker plans on changing up menus seasonally, though size and price points will remain similar. 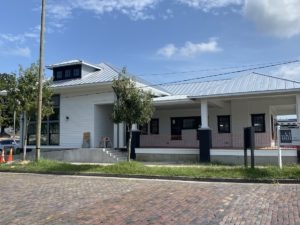 A wrap-around porch will be able to seat 40 diners outside at Three 10, located in the Brooklyn Arts District on Swann and Fourth streets. (Port City Daily/Shea Carver)

Right now, the restaurateurs have their fingers crossed for a mid-October opening. Though they’re at the mercy of last-minute construction needs and inspections. The project has already been delayed; the couple hoped to open in 2019.

“It was super ambitious,” Concklin said.

Then Covid-19 hit and caused the project to stall further and even endure increased costs within the supply chain — lumber and food included. It’s also prevented them from receiving equipment or furniture in a timely manner.

“This was my second choice in table and chairs,” Concklin said.

The two will begin the hiring process soon, and the restaurant itself will undergo the procedure to be plaqued by the historic foundation. “It is definitely something we are excited to see happen,” Concklin said. 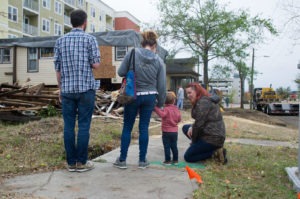 Matt Walker, left, and Jennifer Concklin, far right, watch as the future home of their new southern seafood restaurant is prepared for its move down 4th Street, in downtown Wilmington’s Northside neighborhood,

To receive a historic plaque, an all-volunteer committee, comprising local historians and preservationists, do months of research, according to Travis. They look into the property’s deed history, notable occupants, and architectural style.

“The Allen-Oliver House joins a host of other adaptive reuse successes in the Brooklyn Arts District,” Travis reminded.

Less than a mile away, first built in 1888, Brooklyn Arts Center once was St. Andrew’s Presbyterian Church, but was renovated over a decade ago into an event space and concert venue. Edward Teach Brewery, once the neighborhood firehouse built in 1907, now has become one of 20 breweries in the Wilmington area.

Travis said both establishments are standing examples of how historic renovations “contribute to the economic revitalization of the Brooklyn Arts District.”